As usual, Google I/O was packed full of announcements. However, this year there was an emphasis on making native Android development easier and more enjoyable. The Navigation Architecture Component, released as part of Android Jetpack and the new AndroidX package, aims to simplify the implementation of navigation in your Android app. This component and its guidelines offer a new look into how navigation should be implemented, including the suggestion for the use of single-Activity architecture as the preferred architecture for Android Jetpack moving forward. The Navigation Architecture Component also has support for fragments and deep links out-of-the-box, which we will see further helps create a cleaner, more predictable user experience.

Let’s start by taking a brief look at the Principles of Navigation as highlighted by the new guidelines:

1. The app should have a fixed starting destination

The user should always arrive at a fixed destination after launching the app. This excludes exceptions of one-time events such as login or terms and conditions. This lets users know what to expect when opening your app. Your starting destination is expected to be your home or main view. They should contain your primary navigation widgets such as a bottom navigation bar or navigation drawer.

2. Your navigation should be based on a Last in First Out (LIFO) stack

3. The up button should never exit your app

4. The up and back buttons should function identically, for the most part

This should be true with the notable exception of situations where navigation stack is empty. Unlike the up button which should be hidden, the back button should close the app in these instances.

5. Deep linking to a destination should result in the same stack as normal navigation.

Deep links are an awesome way to take users directly to content that they want to interact with. They should be thought of as potential “quick navigation” methods through the app, not alternative entry points. In order to remain consistent with the principle that your app should have a fixed starting destination, deep linking should result in the same navigation stack that a user would create during normal navigation of your app.

Getting started with the tools starts off as you would expect. You need to add the navigation fragment and UI libraries to your project. They are available via the google() repository.

There is also an optional additional step of including the safeargs navigation Gradle plugin. This plugin helps generate code that allows type-safe access to properties used in argument bundles. You will need to add the plugin to your project build.gradle classpath.

In your project build.gradle, you should now be able to apply the Gradle plugin as you normally would.

The navigation graph lies at the core of the new navigation library. It describes how activities and fragments relate to each other and the ways in which you can transition between them.

“… somewhere the user can go”

You can create and manage new destinations in your navigation graph using the new Navigation editor available Android Studio 3.2 Canary 13 and higher. 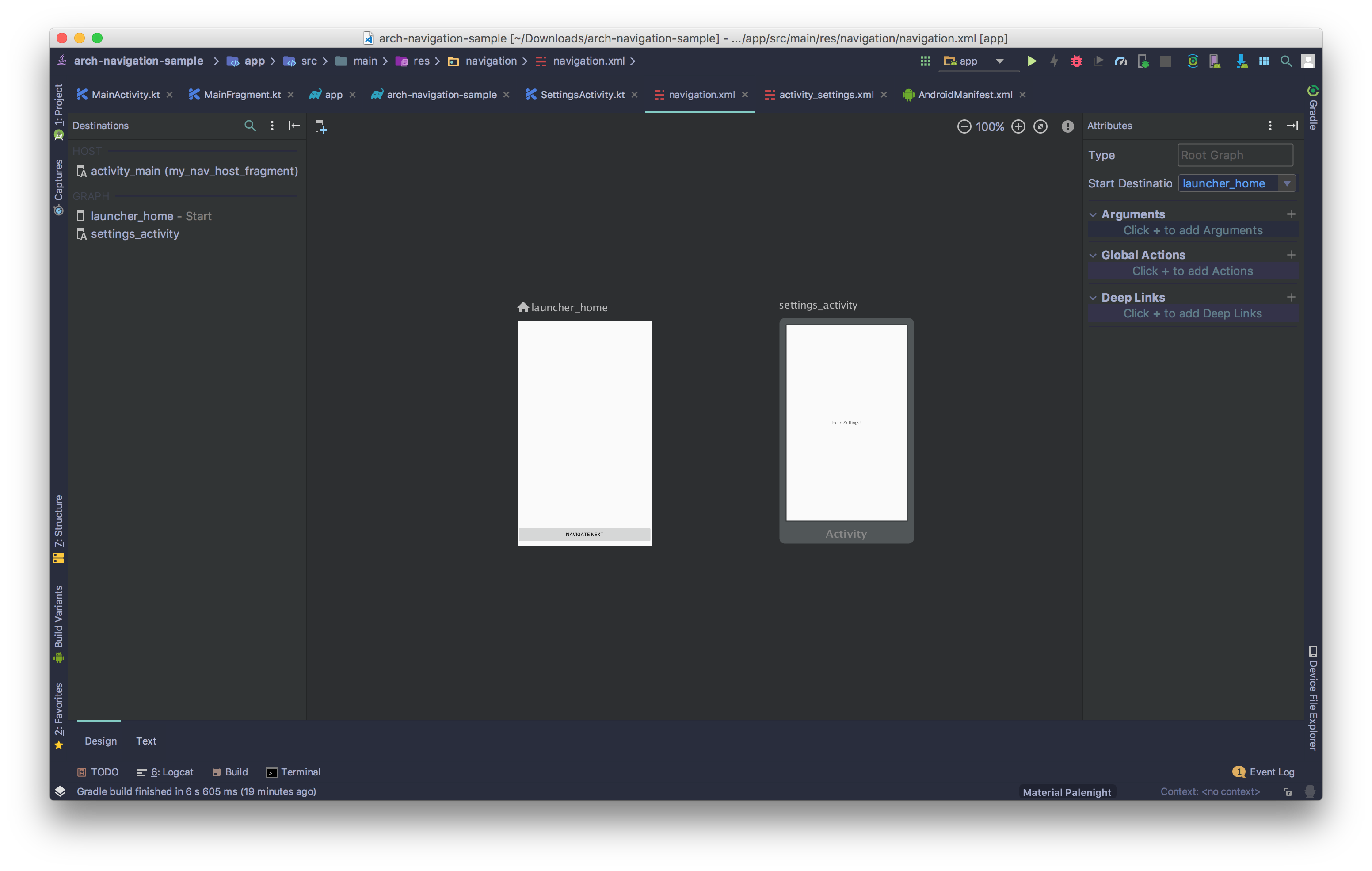 We do this using the action tag along with an id and by providing the destination where we intend to navigate.

You can also accomplish this in the navigation editor by dragging an arrow from the launcher_home destination to the settings_activity destination. 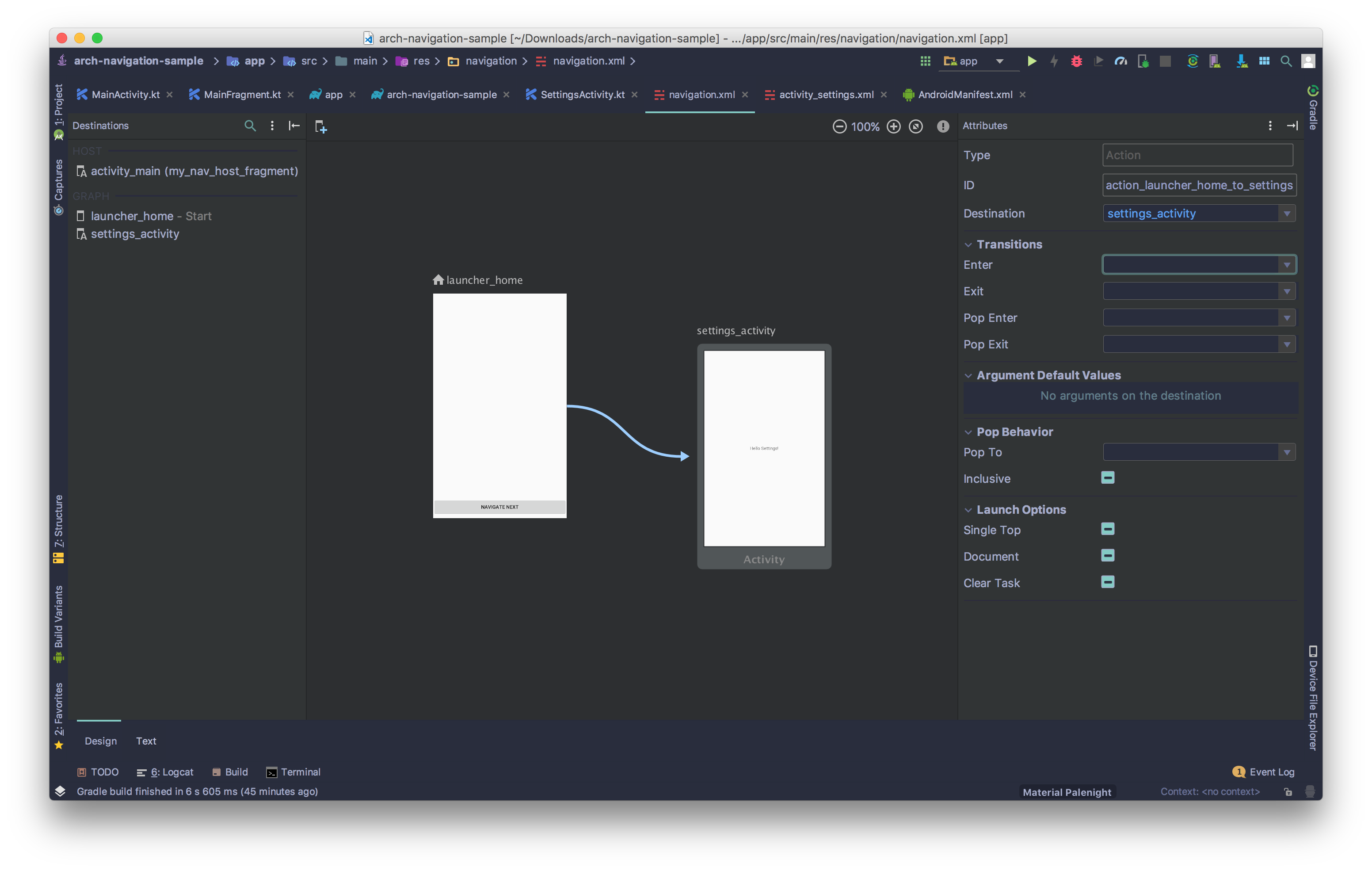 By selecting the action in the Navigation Editor view, we can note that there are several options available to us to customize in the attributes panel on the right side of the screen. We are able to specify transition animations for properties such as the Enter and Exit transition animations, as well as the Pop Enter and Pop Exit animations. Fortunately, the navigation library comes with default animations for each of these options under the nav_default prefix; such as nav_default_enter_anim. While these are just simple fade animations, they are a welcomed convenience.

Now that we have a basic graph setup, we can begin incorporating it into our code. We can do this by configuring an activity to act as the Host activity. This activity contains a NavHost which is an empty view that allows destinations to be swapped in an out as the user navigates through the app. This activity is expected to also contain some form of global navigation such as a Navigation Drawer or Bottom Navigation Bar.

A default implementation of NavHost is the NavHostFragment widget which you can add to your layout. We can see an example of this below.

In your host activity, you want to use one of the setup utility methods available in the NavigationUI class. For this example, let’s set up our navigation graph to use a BottomNavigationView.

To manually navigate to a destination, you simply need to invoke navigate on your NavController function and pass in an action.

A common use case for this would be navigating in response to a click event is a common use case, the Navigation class provides a convenience utility function to help

You can also navigate using the generated NavDirections directions classes. For example, to navigate from our MainFragment to our SettingsActivity,

Navigating this way allows you to decouple navigation logic from the rest of your code. Your activities and fragments don’t need to know anything about where the user coming from or where they are going next. They only need to focus on what they need to do. Decoupling in this way has other benefits. If your routing logic changes, you only need to modify the XML while requiring only minimal changes to your code.

The navigation architecture component comes bundled with a way for you to pass arguments through bundles in a type-safe way. It accomplishes this through code generation. Let’s take a look at this in action. Consider a fragment in our Navigation graph,

Here we add the argument tag defining the name of our argument, its type as well as a default value if it was not passed.

In our fragment, the value is accessed using the generated Args class for the fragment

and that’s it. The fragment doesn’t need any prior knowledge of where the arguments come from. Let’s explore the generated NotificationFragmentArgs class

The generated class does the wiring that you would typically have to do and exposes a lightweight typesafe API for you to work with. It also generates a builder which you can use to prepare your own instance.

Unfortunately, there is currently no way to mark fields as optional or not required and it would have been really nice to be able to create instances of the class using Kotlin’s named parameters as opposed to the builder but this is a good first step in the right direction.

Deep linking is a way for you to jump the user to specific parts of your app experience. Following the Principles of Navigation, we should also build the appropriate back stack that users would have created if they had navigated to the item manually. Fortunately, the Navigation Architecture component has got us covered in this area as well.

By adding the following to our XML,

Intent filters, as well as other setup and wiring logic, will be generated for us.

Finally, to add deep links via web URLs, we only need to add the path data to a fragment or activity in our navigation graph.

We can validate this by taking a look at our Merged Manifest.

Note that it not only added the appropriate intent filter actions and categories, but it also included the scheme for us automatically with both http and https protocols as well as properly configured the path.

To make sure we properly support up navigation, we need to override onSupportNavigateUp.

The navigation library is a welcome addition to the architecture components. The ability to decouple routing logic from the view layer is something that Android has not been able to do historically. The inclusion of well-defined actions and type-safe arguments are excellent steps in providing a robust API.

I also strongly advise using the ktx module for navigation for kotlin projects. The extensions functions defined in the library makes for a much nicer API. For example, all of NavigationUI utility methods become extensions on the classes they operate on. There are also convenience extension functions for common tasks such as findNavController on Activity, Fragment and View.

A great example on using the navigation library is available here.