According to a recent PayScale study, women earn just 77.9 cents for every dollar earned by men. You may think that gap is steadily shrinking, but the facts say otherwise. The American Association of University Women (AAUW) notes that while there was significant improvement from 1980 to 2000, the gap has narrowed by less than 5% in this century.

The gender pay gap is a real, serious and persistent problem that harms women every day.

Pay disparities occur in virtually every occupation, from hourly wage workers to the the highest earners. Women working as physicians and surgeons are collectively paid $19 billion less than they would be if they were paid the same as men.

At WillowTree, we are passionate about doing everything we can to eliminate that gap in our industry. Believing that transparency is an essential first step toward a solution, this year we published our own pay equality stats to set an example for our industry – and hold ourselves accountable for living up to it. We also wanted to make sure that our recruitment advertising expressed our commitment to pay equality in no uncertain terms. Instead of running ads with the usual (and thus invisible) “equal opportunity employer” language, we submitted the following ad to Facebook: 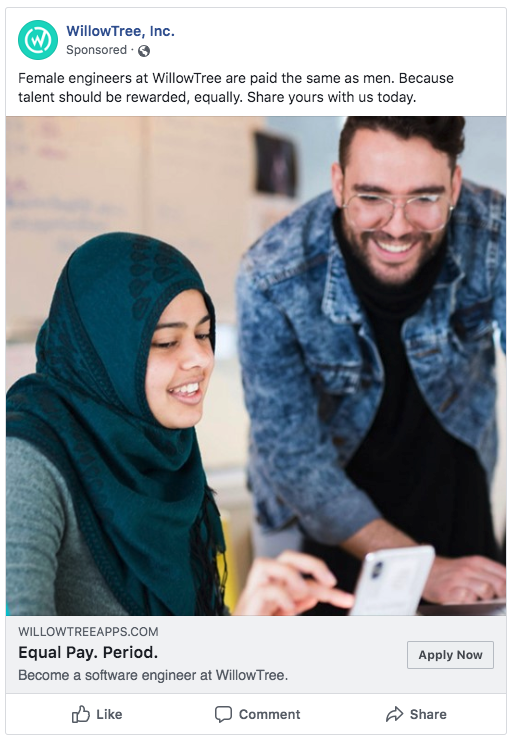 Facebook promptly rejected the ad. Why? Because our page has not been authorized to run ads “related to politics and issues of national importance.” We immediately appealed the rejection, assuming it had come from a faulty algorithm, but the rejection was upheld by Facebook, presumably after a human looked at it, confirming the rejection was Facebook’s intent.

According to Facebook’s most recent guidelines, before any advertiser can run an ad the content is screened via AI and human review to see if the images and text violate community standards or relate to “Politics or Issues of National Importance.” What happens if Facebook decides the ad relates to “Politics or Issues of National Importance?” They make the advertiser jump through hoops in the form of special authorization, as well as adding a redundant “Paid for by” disclaimer.

This policy is almost certainly a response to the withering criticism Facebook has received for its role in facilitating election interference in the U.S. and abroad. Will it actually prevent politically divisive advertising? It’s hard to say. But as our example demonstrates, this policy has already hindered communications about issues that should be universally supported. That’s because Facebook’s definition of objectionable advertising is unreasonably broad: among other criteria, any ad that “Relates to any national legislative issue of public importance in any place where the ad is being run” can and likely will be rejected.

Our recruitment ad had nothing to do with any political election or candidate. It didn’t ask for any new laws to be passed. The ad was about our beliefs as a company – a big part of what makes us attractive to so many brilliant team members.

Of course, equal pay does relate to an issue of national importance – but it’s hard to find an ad for anything that doesn’t relate to an issue of national importance. Are you an oil company trying to sell gasoline? That relates to global warming. A law firm trying to attract accident victims? Clearly a tort reform issue. Want to sell lipstick to teenage girls? You’re getting into all sorts of gender-identity and body image issues. When Facebook says that an ad is objectionable simply because it relates to a public issue, they are placing themselves on a very slippery slope, and almost certainly causing more harm than good.

We are currently going through the process of becoming an “authorized” purveyor of “national importance” advertising. Even though we expect to eventually be approved, it’s clear that Facebook’s system is still broken – and that’s an enormous issue of “national importance.” It’s becoming increasingly difficult to avoid Facebook, even if you’re only trying to place a recruiting ad–68% of Americans are on Facebook, compared to just 25% on LinkedIn. If you want access to the broadest applicant pool, including those who may not be actively looking for a job, Facebook is an inevitable source.

WillowTree needs access to the broadest applicant pool because we are always looking for the best candidates to join our team no matter their gender identity. Unfortunately, you may not be seeing our recruitment ads on Facebook for a while, so we invite you to visit us at our Company page to learn more about the company culture we’re so proud of. Better yet, go to our Careers page to see if we have a position that’s right for you. We promise your talent will be equally rewarded.

If you include user and product research as part of your business or product strategy,...