After spending a year on social media, Netflix, and Zoom, the world has become more reliant on digital technology than ever before. As our lives in the physical world seemed to shrink, our existences in the digital world grew. We spent hours behind screens getting work done, connecting with loved ones, receiving healthcare and news coverage, and distracting ourselves from the current state of the world.

None of this would have been possible without those who have worked to make the tech industry what it is today. And because it’s Pride Month, it’s fitting to take the time to recognize the LGBTQ+ bricklayers (and brick throwers) who paved the way, not only for other queer people, but for the whole tech field, its innovators, its contributors, and its consumers. 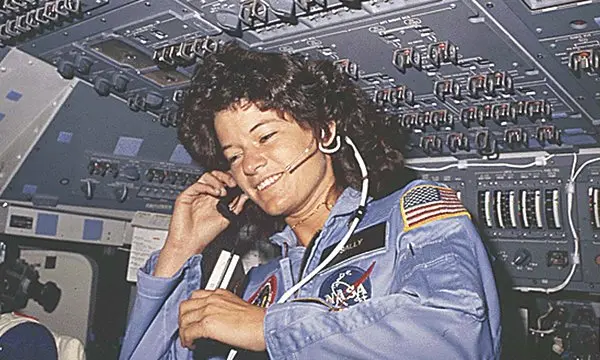 Sally Ride became a household name after being both the first female astronaut from America, as well as the youngest astronaut to date. But unbeknownst at the time, she was also the first LGBTQ+ person to go to space. Posthumously, it was revealed in Ride’s obituary that she was in a long-term romantic relationship with tennis player, Tam O’Shaughnessy. Ride’s sister says Sally wasn’t intentionally hiding her sexuality, but just didn’t feel the need to talk about it publically. Her legacy as an astronaut and physicist is continued through her nonprofit, Sally Ride Science, which focuses on promoting STEM literacy and diversity.

Photo from The New York Times Angelica Ross has built a name for herself across multiple endeavors, working in tech, education, business, and entertainment. The founder of TransTech Social Enterprises and President of Miss Ross, Inc, she’s committed herself to sharing technical savvy, workplace skills, and economic expertise with marginalized communities. Her work empowering trans, gender nonconforming, and people of color is impressive on its own, but is even more so when paired with her career as a celebrated actress on shows like Pose and American Horror Story. One of the most prominent LGBTQ+ figures in tech, Tim Cook has left his mark on the world as the head of Apple. In 2014, he became the very first CEO of a Fortune 500 company to publicly come out as gay - a dinstinction and decision he doesn’t regret one bit. Nowadays, Cook is the face and voice of one of the most influential companies in existence - with his 2020 WWDC keynote reaching 22 million viewers. Calling Martine Rothblatt a trailblazer is an understatement. Cofounder of SiriuxsXM and CEO of United Therapuetics, Rothblatt became both the highest paid female CEO and highest paid transgender person in 2013. Earlier, in 1996, when her daughter was diagnosed with a fatal lung disease, Rothblatt dropped everything and devoted herself to medical research. She uncovered a single molecule that became the key to saving her daughter’s life, and many others in years to come. Nowadays, on one farm in Virginia, United is raising genetically modified pigs with the intention of creating suitable organ transplants for humans. A well-known figure in digital D&I circles, Leanne Pittsford is the founder of three separate diversity initiatives; include.io, Tech Jobs Tour, and Lesbians Who Tech (the latter being the largest LGBTQ community of technologists in the world). Pittford’s goal of changing the demographics of the tech industry champions women, nonbinary people, and people of color. Lynn Conway has been a catalyst for change in tech for decades. As a professor and author in the 70s, she set the stage for the development of the modern microchip that now powers our phones, computers, and tablets. Conway privately transitioned in 1968, and then publicly came out as a transgender woman thirty years later. Overnight, she became a role model for trans people both in and out of the tech field.

Photo from The News House Ann Mei Chang has had a storied career in tech and business, including positions at Intuit, Apple, Google, and the U.S. Department of State. Her work reaches both domestically and abroad, spanning from innovation initiatives in Silicon Valley, to securing federal foreign aid for international groups in need. World War II Hero and the father of modern day computing, Alan Turing is an outright legend. British mathematician turned cryptanalyst, Turing invented a code deciphering machine that was instrumental in defeating the Nazis. Post war, his work in computing and AI paved the way for our modern machines. But as a gay man, his influential work couldn’t protect him from England’s laws against LGBTQ+ people. After being subjected to a public trial, governmental surveillance, and forced chemical castration, Turing took his own life at 41. 70 years later, Turing has received both an official apology from the British government, as well as a pardon from Queen Elizabeth. This month (June 2021) Turing is set to become the face of England’s £50 note.


While this list is by no means exhaustive, it’s also important to take the time to acknowledge the contributions of those that have been lost to time - through queer people being forced to live in the closet, through healthcare disparities and the AIDS crisis, and through violence, intimidation, and muder of LGBTQ+ individuals. It’s also important to note the unevenness in access to technology because of differences in education, resources, and socioeconomic situations. There’s no way of knowing how many tech pioneers were closeted, or how much invaluable innovation was lost with each of these lives and circumstances. What is known is that LGBTQ+ people have been spearheading technological development forever, and will continue to do so in the future.

In the tech community, it’s easy to focus our attention onto a select few in the spotlight - Musk, Gates, Jobs, Bezos. But this Pride Month, I challenge you to look for new role models and heroes - ones that don’t necessarily look, talk, or think in the same ways you do. One of the biggest strengths the tech field has is the ability to reach far and wide, across borders and barriers. This Pride Month, let’s honor those who came before us, uplift those who are doing the work now, and work to make the industry a more diverse and accepting place for the generations to come.