Google Assistant was first announced at Google I/O in 2016. It has grown tremendously since then. Currently it is available on 500 million devices, including speakers, watches, TVs and phones, as well as 5000 connected home devices.

Google Assistant will be available in 80 countries at the end of this year and will support more than 30 languages. All of this has happened in just two years!

Google I/O 2018 continued this rapid clip of improvements to the Google Assistant platform. Here are the most significant steps forward that were announced this week:

One of Google’s big goals is for their users to have more natural-sounding conversations with the Assistant. As demonstrated during the I/O Keynote, Google has made a lot of progress on that by using WaveNet, the voice behind Google Assistant. WaveNet is a deep neural network that produces realistic-sounding speech with human-like pitch, pace, pauses and other characteristics.

The Assistant will be getting six new voices (male and female). Fans of John Legend will be especially excited, as his voice will be coming to Google Assistant later this year—proof of WaveNet’s ability to accurately interpret and replicate human speech patterns.

Google Assistant aims to help you with a variety of tasks in the most natural way possible. The “Continued Conversation” feature will make conversation with the Assistant easier and more flowing. You wouldn’t have to say “Hey Google” every single time you are interacting with it. The Assistant is also able to tell whether you are continuing the conversation with it, or with somebody else. No one likes an interrupting bot! This feature will be turned on in the upcoming weeks.

Moreover, now you can make multiple requests to Google Assistant at once. Saying “Turn on the Warriors game and start the popcorn maker” or “Dim the lights in family room and in the kitchen” will now work as expected.

Google has been working to improve conversational experience for families and children, helping parents to teach their children some manners. Later this year Google Assistant will be able to respond to polite reinforcement. When you add “please” to your request the Assistant will acknowledge it with a phrase like: “Thanks for asking so nicely.”

Electronics manufacturers have been working together with Google to create new smart-display devices that can host Google Assistant. The first smart displays will go on sale in July. Some use cases would be multitasking around the house while playing videos or music, or asking for a recipe and seeing it on the screen in the kitchen.

The Google Assistant experience on mobile phones has also changed. Google describes it as “Immersive, rich, interactive, and proactive.” As an example, “Turn down the heat” would bring the smart home controls right on the screen with the response. The Assistant will also be more proactive. When you go to Google Assistant on your phone and swipe up, it will show a snapshot of your day with helpful suggestions and actions: weather and traffic information, reminders, orders, trips, notes and more. 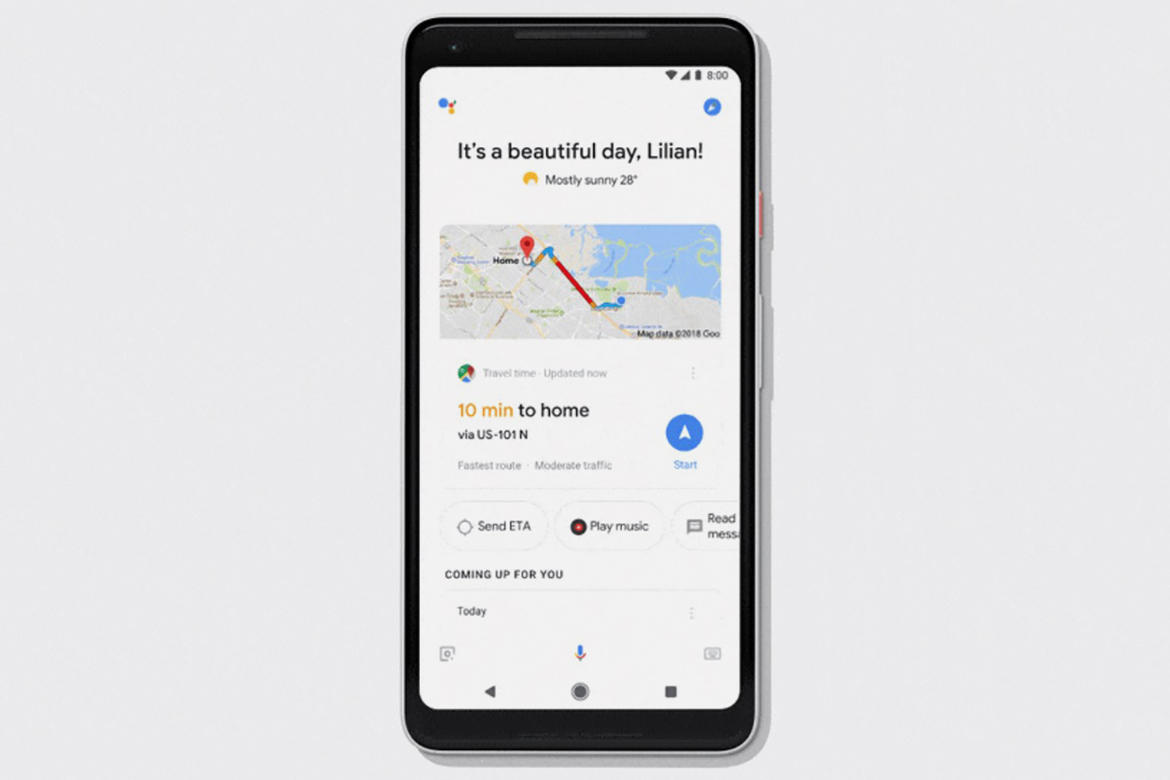 Another note: Google Assistant will be coming to Google Maps this summer. It will have a lower visual profile so the user can concentrate on driving, meaning that you won’t be seeing any visual responses from the Assistant. As shown in the demo, The Assistant in Maps would make it really easy to perform actions like sharing your ETA, and controlling the music.

Another goal that has been set for Google Assistant is the ability to intelligently respond when the conversation doesn’t go as expected (called “course correction”) and better handling of more complex conversations.

At the I/O keynote, Google Assistant was shown making—and leading—two stunningly human-like phone calls to businesses.The first call set up a hair salon appointment, and the second a restaurant reservation for the user, all seamlessly in the background.

Then it showed a notification informing the user that the appointments had been made. Such realistic interaction was possible because of Google Duplex, a new technology for conducting natural conversations. Duplex leverages natural language processing, deep learning, and text to speech engines to carry out these tasks without any user involvement whatsoever.

Google intends to experiment with this a lot more, and improve the Google Assistant even further. Specifically, they would like to tackle the problem of small businesses not having an online system set up and dealing with many similar phone calls from many different customers asking the same questions. The idea is that the Assistant could make a single call and deliver the information to millions of people about the open hours at the business they all were inquiring about.

The Google Assistant and Duplex demo has definitely been one of the most exciting and impressive presentations at I/O 2018. We can clearly see that Google is heavily investing into providing their consumers with great experiences through voice interactions and AI and will continue doing so in the future.

If you have been wondering how you could extend your apps with great voice experiences, WillowTree has created a detailed Executive Guide to Voice for an overview of the emerging business opportunities for multimodal and voice experiences.